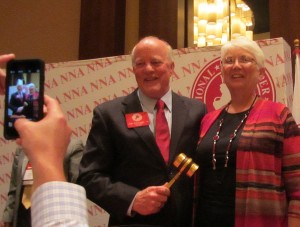 John and Jo Ann Edgecombe, owners of the Nebraska Signal in Geneva, NE, pose for photographs after John was presented the gavel after becoming the National Newspaper Association’s next president during the 128th NNA Convention in San Antonio last week. Outgoing president is Robert Williams of the Blackshear, GA, Times. Interlink is proud to have both Williams and his wife, Cheryl, and the Edgecombes as customers.